It was my sister who spotted this, while we were on a hike. We were going through a stand of beech trees, and, in our neck of the woods, anyway, these trees hang onto their leaves throughout the winter, until the new growth comes in the spring. The old leaves are yellow—almost gold—and the bark is smooth and grey—almost silver. 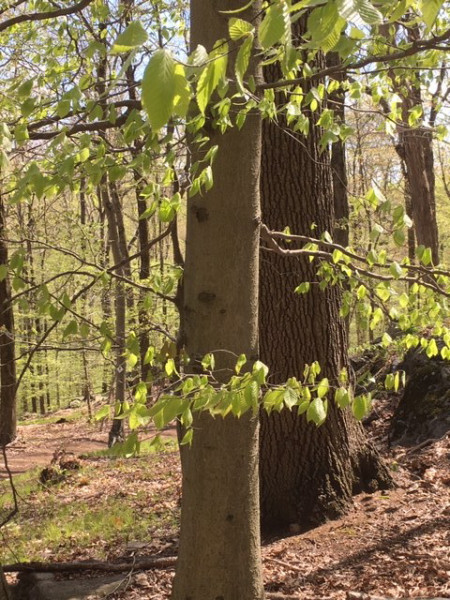 (here's a picture of a beech tree with new leaves that I took on another hike later in the spring. )

Here, Tolkien describes a mallorn tree. It has a grey trunk and yellow leaves. “The branches of the mallorn tree grew nearly straight out from the trunk, and then swept upward;…” (page 389, The Fellowship of the Ring, hardcover Folio edition.) Mallorn trees retain their golden leaves even in the winter—it is late January or early February when the company arrives at Lothlorien. (They leave Rivendell on December 25th.)

Later, we find the fruit of the mallorn is a little silver nut. Beech trees, of course, have nuts, though they aren’t silver.

As Sam’s song proves, Mallorn trees aren’t actually beeches. But it certainly seems that Tolkien, who knew and loved trees, might have been inspired to create the Mallorn by observing beech trees.

About this, I’m sure I’m right! Kingsfoil means, literally, the king’s leaf. It is an aromatic herb with narrow leaves, which grows so readily in certain locations that people think it a weed. It is said to have healing properties, especially in the hands of the king, and it is fragrant, smelling sweet and wholesome when crushed. When I was a little girl, I dreamed of finding kingsfoil growing in the woods. Wouldn’t that be wonderful?

Well, it’s pretty easy to find, but the woods aren’t a likely location since it needs sun as well as moisture. There is a common herb whose name, translated, means the king’s herb. It’s basil., from the Greek “Basileus”. Tolkien, educated in English schools in the late 19th and early 20th centuries, would have studied both Greek and Latin. He surely knew that basil was the royal herb.

But we’re not quite there yet. If Kingsfoil is basil, what sort of basil is it, exactly? 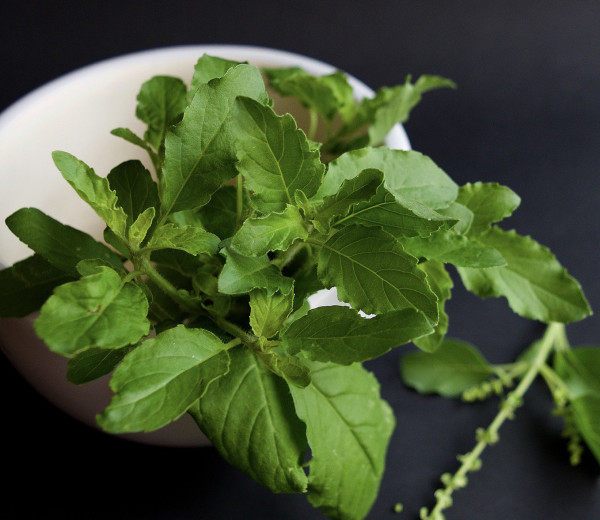 Here’s a description from a box of tea:. “..revered as a sacred plant infused with healing powers.” The tea contains Tulsi, or Indian holy basil.

It seems that, in traditional medicine, holy basil is supposed to combat stress and boost the immune system, among other things. As Spock would say, fascinating! What’s more, no one in The Lord of the Rings eats kingsfoil. It’s not used for cooking, but for healing teas, washes, and steam. Similarly, though Tulsi is used as a seasoning just like regular basil, it’s most frequently drunk in teas.

So kingsfoil is basil. No doubt at all. It’s most likely Tulsi, rather than our common basil, but I might be wrong about that. What do you think? Could Tolkien have known about the Indian healing herb?

This is a crosspost from my livejournal. Here is the link:

"You are not going back out to discover if Louise, magnificent though she be, likes cocoa. Save your experimental zeal for the morning." (Kate Murry to her young son Charles, quoted from memory.)

So, I've been thinking of some beloved books, and real-world equivalents of their plants and animals. We'll start with Madeleine L'Engle.

What sort of snake is Louise the Larger?

Well, what do we know about Louise?

She lives in a stone wall near an orchard in Northwestern Connecticut. She is fairly tame and friendly toward the young boys who name her. She is big, and black. She's got a pretty strong grip, winding herself round the children's arms and shoulders. Of course, there's a lot more to Louise than that, as fans of A Wind in the Door will know. But those are the basic facts. She's a black snake, and that's what she gets called. As a young teen reading the book for the first time, I was convinced she was a black racer, because that was the only black snake I'd ever heard of.

So, when I spotted this lovely creature on a hiking path last fall, I naturally assumed she was a black racer. When I posted her pic to iNaturalist, that's what I called her. And that's where things got interesting.

That monstrous country where I lived

when I was a child,

where we played cowboys and Indians,

and the Indians were fierce warriors,

and the cowboys rode over the hill

where the good guys always won,

and the bad guys died peacefully,

no blood, no shattered bones;

where the good guys always

is still with us.

The wounds are bloody now.

This is a poem I wrote during another dark time, in 2017. God bless the people of Iraq and Iran. And of my country, too. May we all work for peace, and help to bring it.

I have been rereading Carol Plum Ucci’s excellent teen novel, “What Happened to Lani Garver”, and that caused me to start considering angels, and what they really are.

It is now October, 2019. In a little less than five years, as all passionate Niners know,  the Bell riots will take place in San Francisco. Government troops will open fire on impoverished, homeless citizens and kill hundreds.

Showrunner Ira Steven Behr commented that, as they were filming the show, politicians were actually talking about putting homeless people in sanctuary districts—ghettos like those we see in these episodes. He was appalled at how close to real life a science fiction story became.

In Donald Trump’s America, where children are being torn from their parents’ arms and locked in cages, these episodes seem even more relevant than they were thirty years ago. The world of the Bell Riots and the sanctuary districts is a world of extreme capitalism, casual racism, and great wealth juxtaposed with dire poverty. It’s no wonder Past Tense, in spite of some weaknesses, is among the most admired of DS9 episodes.

Plenty of reviewers have discussed Past Tense. They’ve looked at the way the story shows the mentally ill, class divisions, government, and even redemptive violence.  They’ve quibbled about the technobabble and some minor logical glitches in the time travel. All fair enough! But, so far as I know, no one has focused on the story’s spiritual overtones.

I have some trepidation in writing this, but I think it’s necessary. Here goes.

I’ve asked this before, but previously I friendslocked it. Now I’m asking in public. It’s a very simple, yes-or-no question: Do you believe all human beings have, or should have, equal rights, regardless of sex or sexuality, race or religion?

If the answer is “yes”, as I hope it is, you must support the Palestinian cause.

In a modern fantasy series (Chronicles of Ancient Darkness, by Michelle Paver), the young hero is called the listener. The author explains that this is because the boy Torak is an expert hunter. Even though we humans are very visual, the boy perceives more about the natural world by listening than he does by looking.

I’ve quoted this before, but I think it’s pretty powerful—and true! So here it is again: “For when you come to think of it, the only way to love a person is…by listening to them…(Brenda Ueland, from the paperback edition of If you Want to Write, page 6).

This past Friday, my sisters and got to see a wonderful example of what can happen when someone truly listens to another human being. It was at the Tolkien exhibit at the Morgan Library.

Needless to say, the exhibit was fantastic. As one attendee said, it was hard to believe a single human being could be so talented in so many different ways. I loved the photos of the family, the doctoral gown from Oxford on display along with a photo of Tolkien wearing it, and the insights into his creative process. And then the artwork! My twin sister really loved Tolkien’s abstract paintings; I loved his maps and charts; but our younger sister loved best a tiny painting Tolkien made for his son. 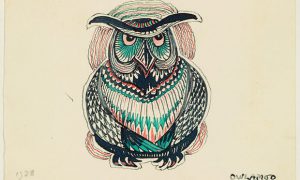 It was a little owl, almost perfectly circular, with rainbow plumage, fierce eyes, and jutting eyebrows. On the plaque next to it was its story. It seems Tolkien’s son Michael, as a little boy, had nightmares about an owl that perched in high places in his bedroom and glared down at him. Tolkien drew this owl for his son. By doing so, he helped him conquer his fear. Michael said his father was extraordinary in the way he listened, with total attention and respect, as if his little boy was another adult. He said J.R.R. Tolkien was the only adult he ever came across who listened in that way to a child. His words on the plaque next to the owl were: his father was ‘both father and friend, ‘a unique adult, the only ‘grown-up’ who appeared to take my childish comments and questions with complete seriousness.’

So I think now my younger sister was right. There was so much that was special in this exhibit, but this tiny pen drawing, done to help a little boy, showed so much about the artist as a human being. It’s also quite a spectacular owl in itself!

I gather Netflix or amazon or someone is going to make a series based on Tolkien’s works. I would personally love a series about a little boy and his owl fighting shadows and fears. Is anyone listening?

It's been forever, I know! But I want to wish all my live journal friends, and everyone who follows this blog, a very Happy Christmas, belated Hanukkah, happy Solstice, Kwanzaa--all festivals of light and joy. To me, this song, especially in this arrangement, is a prayer for peace.

A quick quiz: What do Ahed Tamini and Emma Gonzalez have in common?

I am not saying anything new in this post. Martin Luther King, Jr., said it long before I was capable of thinking such things, and so did Thomas Merton, and so, I am sure, did many other good and wise men and women. But it bears repeating.

To get back to my original question, what do Emma Gonzalez and Ahed Tamini have in common? Not that they are teenage young women in the news; not that both are being attacked by right-wingers; not even that both, in their different ways, are fighting for justice. What, exactly, are these girls fighting?

You might say: Ms. Gonzalez is fighting for gun control and Ms. Tamini is fighting the Israeli occupation. Fair enough. But look a little deeper

That woman who fell,

Of the land she loved--

It will rise again.

She will rise again.